Blankenship Stables has had the privilege to work with so many talented horses & riders, over 30 horses tell this story.  Tori is not a one horse wonder - but it was a wonderful horse that started this gaited gal's journey.

After turning in her Amateur Card in 2006, Tori has had the honor to train and produce outstanding Foxtrotting horses to take to National competition within MFTHBA in Versatility, Performance & Model divisions, earning from 2006 - 2014:

Within the FOSH Organization 2007 - 2010, in all disciplines among all gaited breeds - 26 horses that went on to win countless class championships and State honors including;

Within the Western Dressage Association of America 2014 - present;

In 2011 - 2012 Tori was able to take part in ACTHA’s Nationally Televised Competition - America's Favorite Trail Horse, with her Foxtrotter stallion. The competition started with 1000 horses Nationwide of every breed and riding discipline. By the viewer’s vote, Tori's horse won his episode and then went on to be named one of the top 10 Favorite Trail Horses in America.

In 2013 the Western Dressage Association of America, a USEF Affiliate, has welcomed gaited breeds.  Gaited Horses and Western Dressage.  This is the beginning of a beautiful journey, hope you will join us along the way.

In 2014, Tori was asked to serve a term on the Board of Directors for the Western Dressage Association of America.  Proudly served!  Tori was the original chairperson for the WDAA Gaited Horse committee and still holds that position today.

​2015 was the first year that the discipline of Western Dressage was added to the Horse Of The Year award program. Being named one of the United States Equestrian Federation's Horse of the Year champions is an honor that lasts a lifetime. The Federation’s award program is one of the oldest nationally recognized multi-breed awards programs in the country.  6 horses are honored and awarded in the 5 WDAA levels for the Horse Of The Year program. 3 horse and rider teams under Tori's instruction were recognized and honored with this great achievement by the USEF.

2016 the Western Dressage Association of America launched their Horse Lifetime Points & Award Program.  Several gaited horses under Tori's instruction have earned milestones and their medals in this rewarding educational program.

2017 brought more USEF and WDAA honors, friendship, love and laughter.  Tori received an invitation to join and is currently a member of the USEF Western Dressage Rules Committee.

2018  "Proud Tradition", a gaited Missouri Foxtrotter trained and ridden by Tori, became the first gaited horse to earn the USEF Horse Of The Year Grand Champion title in Western Dressage for Level 2.  Two other Foxtrotters in Tori's training program earned Horse Of The Year top honors in Level 1 and Intro Level, ridden by their owners.

The 2019 show season, Blankenship Stables had 5 horses competing in United States Equestrian Federation licensed, Western Dressage competitions. All 5 of those horses have earned and will be awarded National top honors, over all breeds, by the USEF for the Horse Of The Year Championships.
3 National Champions - Intro, Level 1 and Level 3.  1 Reserve Champion Intro Level and 1 top 6 honor Basic Level -  representing 4 of the 6 divisions that recognize Western Dressage.

2020 The 2020 show season started out grand with our Intro horses moving up to Basic level and out Level 1 horse moving up to Level 2 with outstanding competitive rides.  Then in March the world shut down due to the Covid-19 pandemic.  The 3 horses were planning on traveling to the WDAA World Show in October, that was soon cancelled.  Then WDAA announced "The Pandemic Pivot" and that the World Show would be a virtual one.  With over 2300 rides, literally world wide!  Our 3 horses earned 9 World Championships, 8 Reserve World Championships, two Division Grand Championships.  One of those horses earned breed highpoint with a score that was third highest of the overall 2300 rides.  We experienced things we never thought before with the world going virtual, we worked together as a team and figured it all out.  Now we have the beauty of looking back at all the frustrations and laughing.  Soon USEF competitions started back with strict social distancing practices.  Our basic level amateur horse was named 2020 USEF Horse Of The Year, National Grand Champion.  Our basic level open horse was named 2020 USEF Horse Of The Year, National Grand Champion and our Level 2 amateur horse was also named 2020 USEF Horse Of The Year, National Grand Champion.  All breeds represented and our groovy gaited horses took home the grand in all 3 divisions.  Hello 2021, we are ready with new wardrobe accessories for social distancing, added to our show clothes.  Gait on my friends!

2021 Time to downsize.  My husbands health along with other factors, helped me to realize that I needed to slow down and semi-retire.  We all only have so many rides left on our saddle-log, time to focus on our Home Team.  It was with a heavy heart that I referred my trailer in lessons and the youngsters in training, to fellow professionals that I admire in our area. I started Ash as a 3 year old, he has received a USEF Horse Of The Year National Grand or Reserve Championship every year we set the goal for this honor.  In 2022 he will be a 6 year old and entering Level 2 - Ash is my final competition horse, he will be my next Supreme Champion.  It will take as long as he needs to condition and go up the levels when he is ready and on his terms.  In 2021 Ash did not fail to amaze me again - him and his big brother Pride were both named 2021 USEF Horse Of The Year Reserve National Champion, Open and Amateur divisions!  Our long term boarder horses and their owners who have become like family to us, will continue this journey with Ash & I along with their horses..  Suzzette & Legs, Tane & Rebel, Marcia & Pride, Olivia and/or Beth & GG, Lori & Jerry, Lindsay & Metallica and Melanie & Sombras - it's time to get ready for fun and great times in 2022!!!  What an amazing journey this is going to be!

Gaited horses have always had a myth about them, that they could not perform athletic movements. The Western Dressage Association of America has created an opportunity for any horse and rider to build on their foundation and grow into a brilliant harmonious partnership.
In a world where people tell you something is not possible, it is nice to show them that anything is possible with vision, dedication and love. 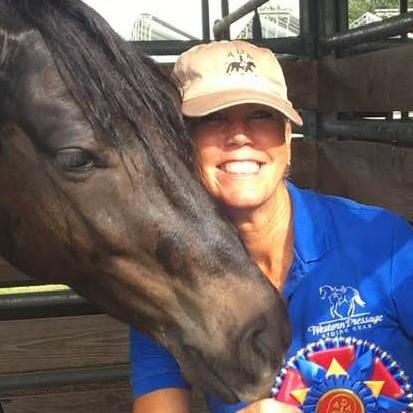